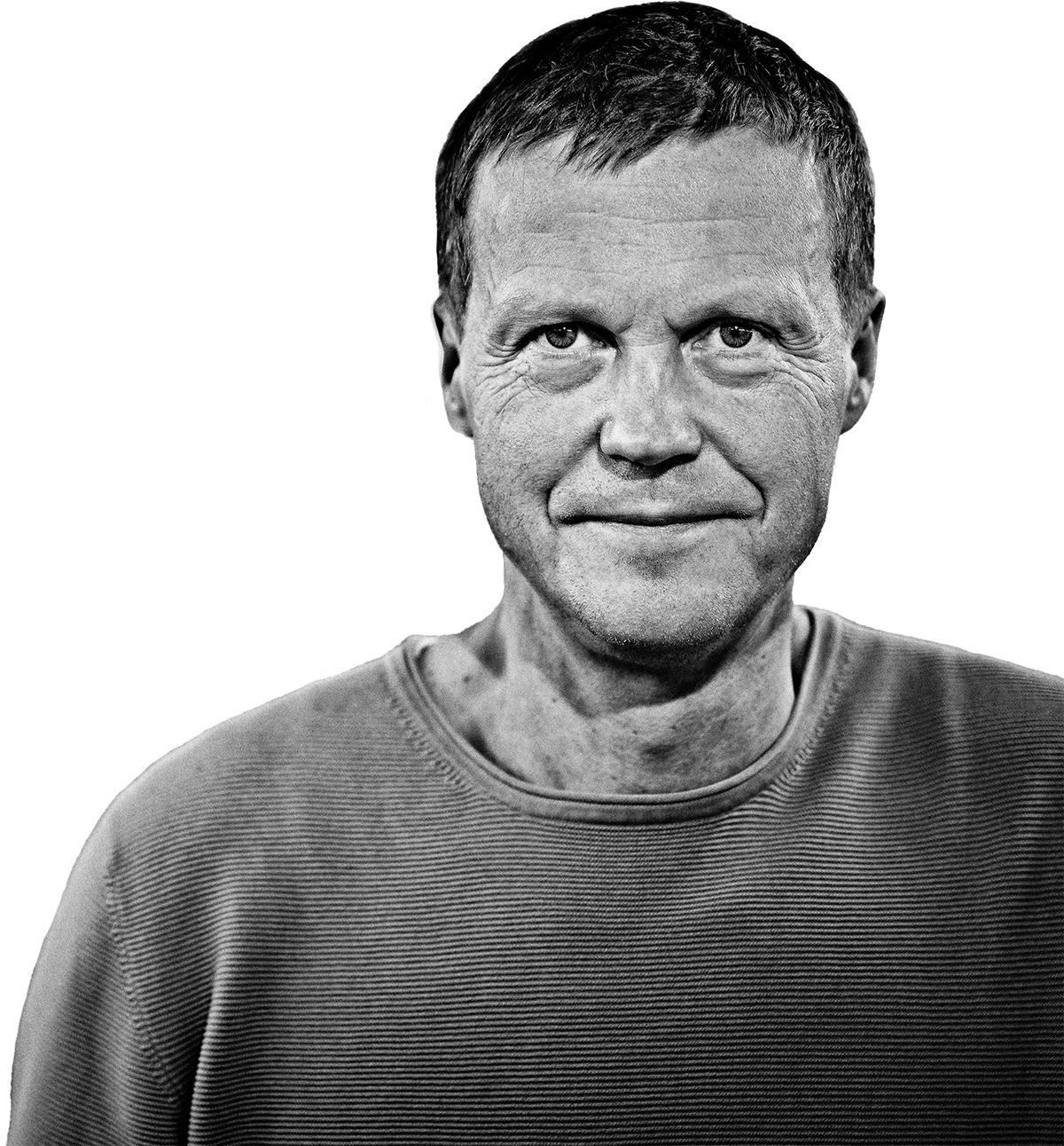 Even though a piece of heel is missing it is not a factory reject. It is a result of a simulation of a mine explosion where one of the Prabos boot has passed the test successfully. Military, work and free-time footwear is manufactured by one of the largest footwear Czech company in Slavičín, the Zlín region. Its current production is about 500 thousand pairs of shoes a year. The brand, which history dates to the mid-19th century, is well-known to Bundeswehr soldiers, the Swiss army and employees of Škoda Auto or ČEZ.

CHAIRMAN OF THE BOARD OF DIRECTORS

It looks like making Christmas cookies, just that the cookie cutter is bigger. A woman places it on a sheet of dark grey leather, and when she pins down the ideal position, she lowers a press that cuts the desired part. “No automated machine can do this. Leather is a natural material: each piece is different, and there may be flaws. It requires precise human eyes and experience,” explains Jaroslav Palát, one of the two main shareholders in Prabos, a company which sews military, work and leisure footwear in Slavičín, in the Zlín region. With an annual production of around 500,000 pairs, it is the largest shoe manufacturer in the Czech Republic. Footwear production has a century-old tradition in this factory. Work with leather goes back even further, to 1860, so the experience is definitely not missing here.

Thanks to it, Prabos supplies European armies, as well as the employees of a number of key Czech companies, such as Škoda Auto, ČEZ, or Lesy ČR, and it is gradually conquering the leisure footwear market too. Its turnover of almost CZK 400 million last year was 60% higher than in 2015. In 2018, the company successfully entered the stock exchange. Of course, not all years have been successful, and the current owners even had to turn Prabos around twice.

For me, IPO meant that my dream came true. Also, it was access to an alternative method of financing, PR awareness beyond our clients, and greater prestige of our company.

JAROSLAV PALÁT
Chairperson of the Board of Directors of Prabos Plus, a.s.

It all started sometime around 1860, when the Pivečka family founded a tannery on the site of the current factory, which was expanded to include the production of shoes in the 1920s. “Baťa tried to get Jan Pivečka on board for leather processing because he was a reputable expert. In the end, he did help Baťa to launch a tannery in Otrokovice,” says Jaroslav Palát. After World War II, the factory was nationalized, and later it was integrated into Svit with its headquarters in today’s Zlín, at that time Gottwaldov.

The 1990s brought the restitution of property, but the descendants of the former founders received only a small part of the shares of the newly established joint-stock company, still a subsidiary of Svit, which went bankrupt in 1999. Afterwards, Prabos was eventually bought by the current owners. “I was a casual investor. I dealt with bankruptcies and receivables. I thought this was a good opportunity. Juraj Vozár and I knew each other. I was more of a financier, while he was an expert on shoes, so we joined forces and put the company back on its feet,” says Palát. At that time, Prabos was burdened with a number of guarantees for the parent company’s loans, which it gradually shed. The new owners restructured the company and won large contracts for it, including supplies for foreign armies.

In 2008, the two Czech owners were approached by their Polish competitor Protektor, which wanted to create a Central European giant in work and military footwear by raising money through the Warsaw Stock Exchange. “They offered an interesting price, and my colleague were promised a managerial position in their future holding. We made a deal. But Juraj had a different idea of how to do business, and after about a year he broke up with the Poles,” recalls Jaroslav Palát. As he says, the new owners brought the company to its knees, and in 2012, they offered it back to its previous Czech owners at a nominal price on the condition that they take over the guarantees for Prabos’ debt.

Today, Palát says today that he would never have said yes under normal circumstances. “Insolvency was imminent: warehouses stocked with unsaleable shoes, an empty order book and electricity bills long overdue,” he says. But he trusted his partner, who mapped the state of the business, and especially his wife. “She asked a simple question, which proved decisive: How many employees are there? When I said two hundred, she said: Well, we have to take the risk,” says Jaroslav Palát. Fortunately, he had assets that he could pledge, but almost all his property was at stake.

As he says, the first three years were infernal. “Fortunately, people believed me and my colleague that we did not come to gnaw the remains of the bones,” says Palát. And his recipe for turning a company around? Hard work, no fear, taking risks. The people of Prabos are not scared easily. The proof is a shoe with an extremely high sole and a torn heel on a locker in a meeting room. “This is a tested piece of anti-mine footwear that we made for the Indian army,” Palát explains.

Thanks to its exceptional know-how, the Czech footwear company stands a chance even in the era of crushing Asian competition. The Asians can compete on price if they sew millions of units of simple shoes. But when they are to deliver sophisticated footwear with a demanding production process and high-quality materials, the prices are comparable. “They are not shy of cheating. They will send you a great sample, but then the quality plummets because they probe how far they can go to make up for the initial losses,” explains the co-owner of Prabos. For the same reason, only a few Chinese manufacturers are licensed to use the Goretex membrane like Prabos.

A new seamstress? A miracle happens from time to time.

In financial terms, military footwear accounts for a half of the company’s production today. The sales depend on how successful the company is in public tenders at home and abroad.
‍
The last contract was for the Swiss army. “The Swiss have one huge advantage: they are completely transparent. They have no local manufacturer, so you have to meet the quality, and then the price decides. The Germans always choose a local company, but sometimes they award part of the contract to make things less blatant. We do not even bother in France because you will never win a tender if you are not a French company,” says Palát. On the other hand, the Baltics are an interesting market. Sometimes Prabos scores points because it shows interest in small series for which giants like Lowa and Meinl will not even prepare samples. For example, Prabos won a contract for Dutch pilots.

Work footwear accounts of a third of the production, and the rest is casual footwear, which was only added in recent years. However, it was a good decision. “In the military segment, we are no longer able to produce much more. In work footwear we strive to eliminate simple models and increase added value, and leisure shoes are what brings growth, albeit gradually, these days,” explains Palát.

Prabos relies on Italian design. Specialized Italian studios know trends and materials development and are able to supply complete production documentation. 90 per cent of the production takes place in the factory in Slavičín, and partner companies in Slovakia help in the event of need. The company also has a branch in Ukraine, but its development would be too heavy a staff burden, so the production has been negligible so far.

The main plan for the future is a gradual automation. “It’s impossible to find a new seamstress. Sometimes a small miracle happens when someone shows interest in the job, but we have to teach them. There is no longer such a field of study in the Czech schools,” says Palát. Automatization is thus unavoidable. The company treads slowly so that machines gradually free employees from routine operations so they can devote themselves to better-paid work. No automated line is yet able to produce the sophisticated footwear made by Prabos. “The idea that we input material into a machine and a shoe appears at the end is unrealistic. A hundred people really have to touch those shoes with their hands. If there was another way, Baťa would have had automated production back in the 1930s,” says Jaroslav Palát.

The contract for the Swiss increases our self-confidence – an interview (CZ only) with Jaroslav Palát for MF DNES.

Prabos boots were tested by Czech scientists in Egypt

Co-operation scientists with the commercial can work! The Tested in the Dessert trademark is already used by the Charles University for two years.

Change of trading on the PX Start market

In response to investors’ demand, the PSE has decided to increase the frequency of trading on the PX Start market from monthly to daily. From 12 March 2020, trading will take place every business day in regular morning auctions.

Has the business story of Prabos appealed to you?